Renowned Urologist for the Plaintiffs Does Not Use Synthetic Mesh

Renowned Urologist for the Plaintiffs Does Not Use Synthetic Mesh 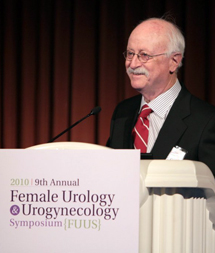 This coverage is provided in conjunction with We Are Mesh Survivors, a coalition of synthetic vaginal mesh implant survivors united to demand justice for those who have suffered and to demand that existing products be pulled from the market until their safety can be demonstrated.

You could call the afternoon witness in the Huskey v. Ethicon trial a rock star among urologists.

Dr. Jerry Blaivas is an internationally renowned doctor who is known as the doctor of  “last resort” for men and women who’ve had unsuccessful urological procedures.

Women from around the globe seek his counsel at his New York City office and have been doing so since the late 70’s.  As well as seeing patients and doing surgery at least once a week, he trains other doctors at Weill Cornell Medical College and is the attending surgeon at New York Presbyterian Hospital  and Lenox Hill Hospital.

Dr. Blaivas was on the stand today in Day Four of a defective product trial that claims Johnson & Johnson’s transvaginal tape (TVT-O) is a defective in its design, its manufacture, and does not adequately inform doctors, therefore patients, on the potential for risks and complications.

Blaivas appeared as the plaintiff wrapped up their trial in this Charleston, WV federal courthouse, the courthouse where 66,000 pelvic mesh trials have been consolidated.

The doctor was qualified as an expert by Fidelma Fitzpatrick (Motley Rice), one of three attorneys appearing on behalf of Jo Huskey.

According to device instructions, Mrs. Huskey was an appropriate candidate for a TVT-O despite her medical history. But after his exam of the patient, Dr. Blaivas determined  the TVT-O sling had eroded and that fact as well as the attempt to remove the mesh had left a thickened, hard mass of scar tissue on the left side of her vagina, causing her pelvic pain.

Dr Blaivas is not a fan of the polypropylene synthetic sling. Instead he performs the similar operation but uses a piece of muscle he harvests from the woman’s own body called fascia. The operation takes about an hour and the woman may spend the night in the hospital.

At one time he did try the synthetics but he concluded “I didn’t see a reason to do it and I stopped.” He told the court he’s among a group of doctors who have rejected polypropylene slings.

When seeing other patients who have been referred to him, his philosophy is – “First do no harm”  –  and that sometimes means he sacrifices removing all of the mesh because of the potential for further complications.

He told the court the TVT-O is particularly difficult to remove because it can make conditions worse as it passes through the muscles and nerves of the obturator space where the leg connects to the pelvis.  The doctor warned that is not a place that many pelvic surgeons or gynecologists truly understand.

Scarring from removal and reaction to the mesh causes chronic pain. In an article shown to the jury, Dr. Blaivas and others have characterized injured women as “mesh cripples.”  Under cross examination by Christy Jones, she revealed the article relates to mesh used for pelvic organ prolapse (POP). That mesh usually comes in kits and involves more mesh but Blaivas says the principle is the same and the mesh is the same.

Looking at a document on cure rates five years after a fascial sling, Dr. Blavias said the efficacy was 90 percent with no serious complications.

If Mrs. Huskey got the autologous sling could she be suffering today?  he was asked. “I don’t believe she would.”

He concluded with polypropylene mesh, “The risks do outweigh the benefits,” said Blaivas.

Fitzpatrick wanted to rule out the potential for pain from any one of Mrs. Huskey’s previous conditions such as an ovarian cyst, diverticulitis or her back pain.  No said the doctor, “They’re not related,” adding that when he looked at her records he did not see that mass of scar tissue in 2010.

If a failure to inform is one element of a defective product, Fitzpatrick asked the doctor if there are complications if a doctor follows a manufacturer’s instructions. Yes he said.  He’s even seen patients from some of the world’s most famous surgeons who have been referred to his office for “last resort” treatment, so expertise and experience don’t seem to guarantee a good outcome.

Does the IFU or instruction for use warn adequately warn of the injuries Mrs. Huskey sustained?  “It does not! said Blaivas.

Do you believe the medical consent form is consistent with information in the IFU? Objection!

Did Mrs. Huskey consent with full knowledge  with what could happen to her? Objection!

Dr. Blaivas told the court the TVT-O and its implant and explant were the cause of Mrs. Huskeys abnormal pelvic pain, not the doctors who attended to her. Fitzpatrick continued:

“Is there any surgical intervention that can cure Mrs. Huskey?  No.

Will she require pain management in the future? Yes she will.

Would you consider her problems transitory? No.

Can it be treated with an over the counter analgesic? No.

Until mesh came along, Dr. Blaivas said he had never seen anything like the mesh-related injuries he sees today.

Under aggressive cross examination, Jones asked Dr. Blaivas how much he charged to be on the stand here today?  $15,000 he said.  And tomorrow?   No, he thought it would be less.

What about all of the endorsements from the professional medical societies that say TVT and TVT-O slings used to treat stress urinary incontinence are the most common surgery and the  “Gold Standard”?  She went through each organization and repeated the claim that 99% of doctors who belong to the American Urogynecologic  Society (AUGS) use the synthetic slings.

“They do,” said the doctor.

And what about two studies that show great success with TVT slings?

“That’s hardly representative to me of anything. They’re unreliable.  There are millions of these slings done and these are 63 women, I do not support it!”

Dr. Blaivis will continue on the stand Friday, the day the plaintiffs are expected to wrap-up their case.  By the middle of next week the defense should also conclude its case and a verdict is expected before the end of the week.

Johnson and Johnson has not yet received a favorable verdict in any of its three jury trials. Last February the judge in this case granted a motion to end the trial in favor of J&J, but the giant healthcare company lost one high profile case in New Jersey last year ($11.1 million Linda Gross) and a case in Dallas earlier this year (Batiste $1.1 million). The Batiste jury also found this SAME mesh, the TVT-O, to be defectively designed!

There are 22,000 similar cases filed in this same court before Judge Goodwin and almost 35,000 filed around the nation naming Johnson & Johnson.

About the Author: Jane Akre

I’m National News Editor, Jane Akre and I began Mesh Medical Device News Desk aka Mesh News Desk (MND) in the summer of 2011 just after the Food and Drug Administration issued an explicit warning to the public that complications associated with surgical mesh used for prolapse repair (POP) and incontinence (SUI) are NOT rare! That was the starting point for the litigation you see today and thousands of lawsuits have been filed by women whose lives have been altered, some permanently, by the use of this petroleum-based product.

Thank You! Continue this
coverage in the public interest with a donation to: Mesh Medical News Desk