Will Caldera Medical Ever Settle its Mesh Claims?

Caldera Medical of Agoura Hills, California announced last February that it was insolvent and because it was broke, would offer a limited settlement to women who alleged its gynecological mesh products injured them. The amount came to about $3,000 per mesh-injured woman, more or less depending on the degree of injury.

By March 2016, Caldera proposed a $11.75 million settlement for then 2,000 women. See the published settlement notice here.

Caldera claimed it did not have enough medical insurance to cover injuries. The initial insurance pool of $25 million was whittled down by legal fees to pay lawyers representing Federal Insurance Company and Caldera. The issue was whether or not Caldera had insurance coverage between 2008 and 2011 and how much coverage there was.

So with a pool of $11.75 million remaining, for the 2,000 to 4,000 women involved, there would be no opting out. It would be a "take it or leave it" settlement. (This was always a separate matter from multidistrict litigation centered in West Virginia with nearly 100,000 cases amassed in one federal court.)

But here we are, one year later, and the Caldera Medical settlement has not happened.

What has happened is that some of the women have filed pro se protests to the proposed settlement. See Samantha's story on Mesh News Desk here and here.

Women wanted evidence of the actual value of the company if it were liquidated.

Kline Specter objected to the final settlement approval again this last November citing that the liquidated value expert designated by Caldera was not an expert and had worked with company employees to issue his report. See Nov 7 2016 Kline Specter Objection to Settlement.

Judge Wilson asked why was Caldera still in business if they were cash poor and only had a small amount of insurance to settle claims.

In a humanitarian-sounding gesture, the company said it had plans to implant one million women in third world countries and to train doctors on the use of its mesh products.  See Mesh News Desk coverage, Feb. 2016 here.

Mesh News Desk has asked the company for an update on the IVUMed partnership but no call was returned by publishing time.

And as further evidence of its solvency, last October, Caldera Medical paid thousands to be a sponsor of the American Urogynecologic Association (AUGS) annual conference where a company representative told your editor that the company was fully solvent.

Caldera products include in the settlement include the T-Sling, the Desara, Ascend, Hydrix, and the pelvic organ prolapse mesh, Vertessa.

Caldera Medical says it is dedicated to “improving the quality of life for women.”

AMS said Caldera made use of its novel surgical instruments for treating incontinence, but the district court decided that Federal Insurance had no duty to defend AMS because it was not insured under the Caldera Medical Policy.   The U.S. Court of Appeals for the Ninth Circuit affirmed.

Meanwhile Caldera CEO Bryon L. Merade appears to be venturing out into other holdings.

Proposed Changes to the MDL System - How Did it Work for You?

Multidistrict litigation was supposed to move more than 100-thousand pelvic mesh cases quickly through the court, but the MDL left many cases unresolved and many law firms handsomely rewarded. 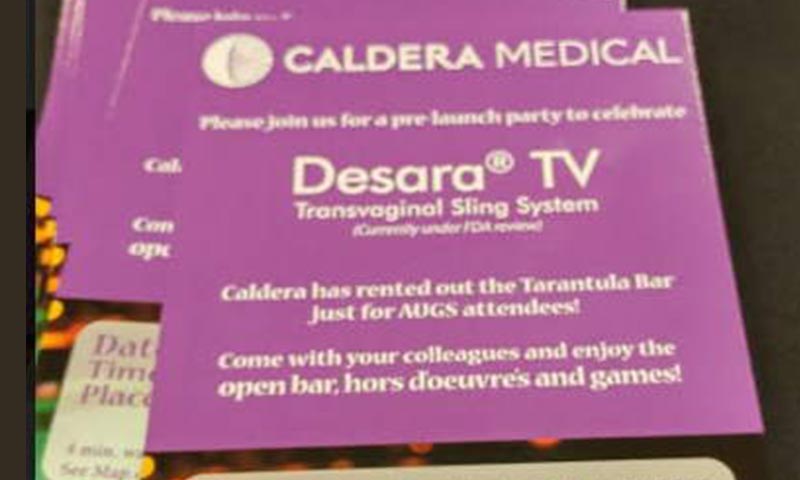 In February, 2016, a class action settlement was announced for Caldera Mesh Survivors, but it was greatly reduced from the $25 M insurance cap due to fighting among lawyers.